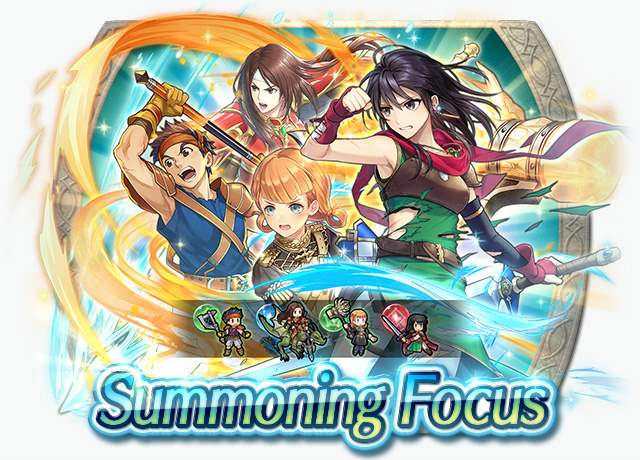 Heroes who are involved in Voting Gauntlet: Father-Complex Fray are available as part of a 5★ summoning focus!

Son of Garcia, a warrior of Renais. A very
straightforward and honest lad raised without
a mother. He greatly admires his father's skill.
Appears in Fire Emblem: The Sacred Stones.

"When I get home, I want to rebuild my village. After that, I'll go on a voyage—and train on the open sea!"

Daughter of Quan and Ethlyn, and inheritor of
the Gáe Bolg. She was raised by her family's
enemy, Travant. Appears in Fire Emblem:
Genealogy of the Holy War.

Earthly Gáe Bolg
Mt: 16 Range: 1
Grants Def+3. In combat against an infantry,
armored, or cavalry foe, inflicts Atk/Def-5 on
foe and neutralizes foe's bonuses to Atk/Def
(from skills like Fortify, Rally, etc.) during
combat.
This skill can only be equipped by its original unit.

Foster daughter of Eyvel, mistress of Fiana.
Freed from a curse, she now seeks to become
a great swordmaster. Appears in Fire Emblem:
Thracia 776.

Mareeta's Sword
Mt: 16 Range: 1
Accelerates Special trigger (cooldown count-1).
If unit is not adjacent to an ally, grants
Atk/Spd/Def/Res+4 and neutralizes effects
that guarantee foe's follow-up attacks and
effects that prevent unit's follow-up attacks
during combat.
This skill can only be equipped by its original unit.

Rouse Atk/Def 3
At start of turn, if unit is not adjacent to an ally,
grants Atk/Def+6 to unit for 1 turn.
Cannot use:

"Lord Leif, Lady Nanna... I will do whatever I can to safeguard you. I swear it on this blade."

Noblewoman of the Holy Kingdom of Faerghus
and niece to Baron Dominic. Ever the good
student, she can sometimes overdo it. Appears
in Fire Emblem: Three Houses.

Crusher
Mt: 16 Range: 1
Grants Atk+3. Calculates damage using the
lower of foe's Def or Res. If a Rally Assist skill
is used by unit, target can move 1 extra space.
(That turn only. Does not stack. No effect
on cavalry allies with Range = 2.)
This skill can only be equipped by its original unit.

Def/Res Ruse 3
If a Rally Assist skill is used by unit or targets
unit, inflicts Def/Res-5 and【Guard】on
foes in cardinal directions of unit and target
through their next actions.

Atk/Def Gap 3
At start of turn, grants Atk/Def+5 to ally
with the highest Atk+Def total for 1 turn.
(Excludes unit.)

"I've been studying, but there's this passage I'm having trouble with... Would you mind taking a look?"

Ross respects his dad more than anyone else in the world!