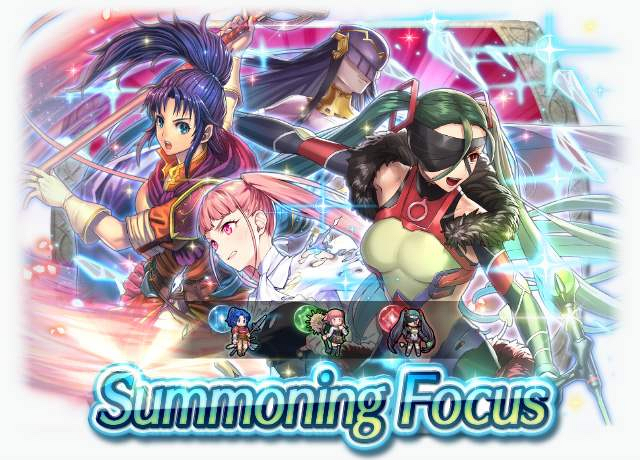 Heroes who are involved in Voting Gauntlet: Ponytails vs. Pigtails are available as part of a 5★ summoning focus!


Noble of the Leicester Alliance and daughter of
House Goneril. Has a lazy personality and a
habit of manipulating people into doing things
for her. Appears in Fire Emblem: Three Houses.

"I was writing a letter to my brother. Force of habit. I have a whole stack of letters I can't even send him."


A singer with a slick image and many fans.
Throws herself into battle alongside Tharja.
Appears in Tokyo Mirage Sessions ♯FE Encore.

Mirage Rod
Mt: 14 Range: 2
Grants Atk+3. Inflicts Atk/Res-6 on foes within
2 spaces during combat.
This skill can only be equipped by its original unit.

Lull Atk/Res 3
Inflicts Atk/Res-3 on foe and neutralizes foe's
bonuses to Atk/Res (from skills like Fortify,
Rally, etc.) during combat.
Cannot use:

"I can't believe how cute that owl is... Huh?! Where'd you come from? It's not cool to eavesdrop on people."


Hails from the Altean village of Sera. Leader
of the 7th Platoon, a group of newly appointed
knights. Serves Marth as a royal guard. Appears
in Fire Emblem: New Mystery of the Emblem.

Spear of Shadow
Mt: 16 Range: 1
Accelerates Special trigger (cooldown count-1).
If foe initiates combat or if foe's HP = 100% at
start of combat, neutralizes penalties on unit
and inflicts Atk/Spd/Def-5 on foe during
combat.
This skill can only be equipped by its original unit.

Rouse Spd/Res 3
At start of turn, if unit is not adjacent to an ally,
grants Spd/Res+6 to unit for 1 turn.
Cannot use:

"Lord Marth is a truly kind man. Scoundrels may look to take advantage, but I won't allow it."

Let's study the art of cooking together, Kris!