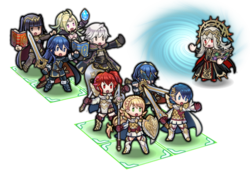 The Tempest Trials is a special event where you challenge a series of high-difficulty maps, which lasts for ten days. Clear them repeatedly and to increase your score and get special rewards during the event period.

There are several difficulties to select from. Each difficulty not only changes the strength of enemies but offers a different number of maps and different number of ally teams you can deploy. During the first two battles of the day, the score earned is tripled, and the units used also get HP+10, Atk/Spd/Def/Res+4 and receive double SP and EXP. Select the difficulty level that best suits your allies:

If all of the allies on your team are defeated, you can immediately make a new team of allies and try the map again. However, be aware that the allies that were defeated cannot be used again until either the last map is cleared or all your teams have been defeated and you try again. Try your best to come up with strategies that will allow you to advance without sacrificing your allies. Be aware that your allies will continue to the next map in the set with the same HP and cooldown as when they finished the previous map.


It's a Battle of Attrition[edit | edit source]

If you try a map again with a different team of allies, the enemies defeated by your previous team will not reappear. Any surviving enemies will carry over the HP they had before, and their Special cooldown will reset. Even if you didn't damage the enemies with your previous team, their starting HP will be reduced by 20% so they will gradually become easier to defeat.

If you can clear the final map, you will receive a score based on your overall completion. The score will increase depending on the difficulty chosen, the number of maps cleared, your speed in clearing them, ally survival and whether a Bonus Ally was used. Even if all of your teams are defeated, you can earn a smaller score based on the number of maps cleared up to that point. Starting with the third Tempest Trials, Reunited at Last, the first two map sets you complete each day will award triple score.

The speed rank is based on the number of turns it took to complete the trial, turns spent on failed attempts do not count.

Beating a trial run with Team 1 results in an A rank, even if some members were lost. One survival rank is lost for each team that gets eliminated.

As of the Reunited at Last Tempest Trial, bonus allies also get HP+10 and Atk/Spd/Def/Res+4. They will also receive double SP and EXP.

Rewards are given out based on cumulative score over the event, as well as the player's ranking in the event.

Enemies are calculated as if they have stat variations.