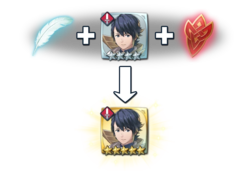 Unlocking potential is the process of upgrading a character's star rarity. It can be found under the Ally Growth menu.

All characters can be upgraded as far as 5

, one rarity at a time. When a character's star rarity is raised, the character's level is reverted back to 1 and his/her stats are also reset. You will also lose extra stat bonuses gained through merging allies. Skill Points (SP) and skills learned are carried over.

Unlike in most Fire Emblem games, a character's stats before "promoting" in this way are not taken into account, meaning that unlocking a character's potential before level 40 will not result in any lost stats. However, leveling up characters in battle or through the Level Up system is the most efficient way to gain SP. What this means is if a character's potential is unlocked before level 40, the player will miss opportunities to gain larger amounts of SP through leveling up in battle. SP is never lost for good, however, since defeating enemies always grants a small amount for the character who defeated them—it's simply more efficient to gain leveling up in battle or with shards and crystals.

By going to the Allies tab and selecting "Advanced Growth", you will find the option to "Unlock Potential". To unlock potential, you will need:

Each specific weapon type requires a specific color badge. Which badge needed is shown in the following table: