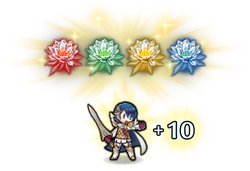 Use Dragonflowers is a feature introduced in Version 3.2.0 where the player can use Dragonflowers to increase the stats of a unit. It can be found under the Ally Growth menu.

Infantry heroes released before version 3.2.0 are eligible for 15 enhancements instead.

There are four types of Dragonflowers, one for each of the four movement types:

Flying. To enhance a unit, Dragonflowers matching its movement type must be used. Each enhancement will cost more Dragonflowers than the last, but the pace of this increase differs based on how many enhancements a unit is eligible for:

When a unit receives a Dragonflower enhancement, one of their stats will increase by 1 point. The stat selected for each enhancement is the highest 5

If there is a tie between two level 1 stats, the stat to be increased is chosen with the priority of HP > Atk > Spd > Def > Res.