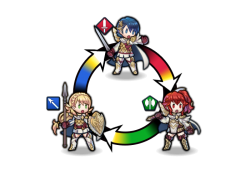 Gem weapons such as

Sapphire Lance+ enhance the effect of the weapon triangle advantage to grant the advantage +40%, and the disadvantage -40%. This is effectively a built-in

Triangle Adept 3, which enables units wielding such weapons to more effectively counter a specific unit color at the cost of becoming much weaker against another.

These skills grant affinity, and are thus affected by skills such as Cancel Affinity. Cancel Affinity disables any advantage modifiers (such as those from gem weapons/triangle adept passive or the Raven Tomes only if said tomes are used along with Triangle Adept.) on the unit with the skill equipped, but also supplies certain protection against weapon triangle advantage modifying skills equipped on the enemy unit.

Raven tomes such as

colorless weapon users. This means that a wielder of, for example,

Blárraven+ has +20% against both red and colorless units, and -20% against green units.

These skills do not grant affinity to an existing weapon-triangle advantage, but rather a new advantage entirely, and are not affected by Cancel Affinity.

Unrefined weapons related to this keyword