A guide explaining the basics of the Arena.

What Is the Arena?[edit | edit source]

The Arena is where you can battle rivals from around the world. You can enter it from the Arena Duels section of the Battle Screen. Win seven battles in a row to prove that your teams really have what it takes!

In order to battle in the Arena, you must use a

Dueling Swords are restored each day at 7:00 AM UTC automatically, so put them all to use each day!

In the Arena, your score is calculated when you win. It's based on the strength of your rival. When you win consecutive battles you'll also get chain bonus up to six times. Try to win five battles in a row!

Each season lasts one week. After it ends, the reward and rank you can receive will change based on your high score for the season. Seasons start at Tuesday at 7:00 AM UTC each week. Be sure to get in some battles before each one is over!

You will not be able to participate in battles from Monday 11:00 PM UTC to Tuesday 6:59 AM UTC while results are calculated.

Each season, if your maximum points help you meet certain criteria, you'll be promoted. And depending on your rank in the tier, you can even skip a tier! Try to get promoted every season by winning as many battles in a row as possible! 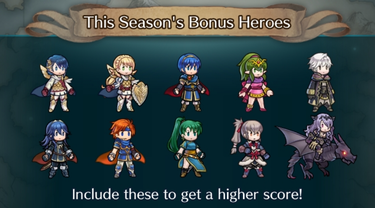 Each season, when someone else initiates a battle against your team and your team wins, you'll also earn Defense Points. You can set your Defensive Team from the Edit Teams option in the Allies menu. When the season ends, you can earn rewards based on your Defense Points, so be sure to keep an eye on those points too.

You can get rewards based on your high score and defense points from the end of the season and your tier of the new season.