A guide explaining the basics of Legendary Heroes and the Confer Blessing mechanic.

What are Legendary Heroes?[edit | edit source]

Legendary Heroes are a special type of Hero that can boost allies with a special blessing. Use the Power of the blessings to boost your team! 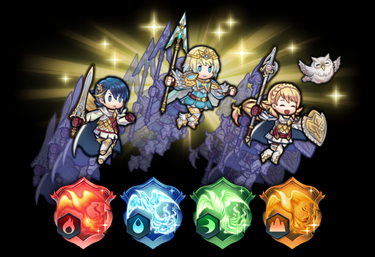 The first Legendary Hero Fjorm: Princess of Ice, will become your ally after you clear Book II, Chapter 1: Part 5 of the main story.

Another Legendary Hero, Ike: Vanguard Legend, will join your party if you complete Xenologue 3: The People's Hero.

Legendary Heroes have an assigned element: Water, Wind, Earth, or Fire. They can provide additional power to allies who have received a blessing of the same element. 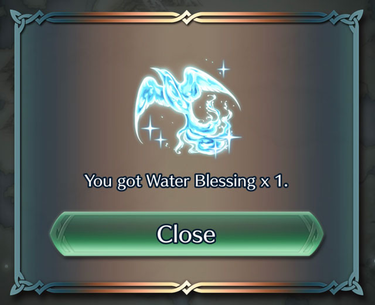 You can use the Blessing item on an ally of your choosing.

If a Blessing item is used on an ally, they'll receive double the SP in battle. They'll also receive a bonus stat boost if they go into battle with a Legendary Hero of the same element during the appropriate element season.

For example, if it's Water season, any allies who have the Water blessing and go into battle with Fjorm: Princess of Ice will get a stat boost of HP+3 and Spd+3 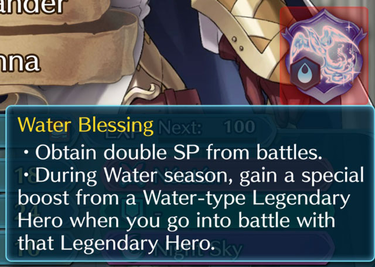 Each season will feature two of the four elements: Water, Wind, Earth, or Fire. Season will change each week at Tuesday at 7:00 AM UTC.

The current season is displayed on the upper-left corner of the screen.