A guide explaining the basics of the Weapon Refinery mechanic.

What is the Weapon Refinery?[edit | edit source]

In the Weapon Refinery, you can use special items to improve certain weapons of 5

allies to make them stronger!

After clearing Book I, Chapter 13: Diabolical Bloodline, you'll be able to take on the Intermission chapter The Rite of Blades. After clearing this, you'll be granted access to the Weapon Refinery. 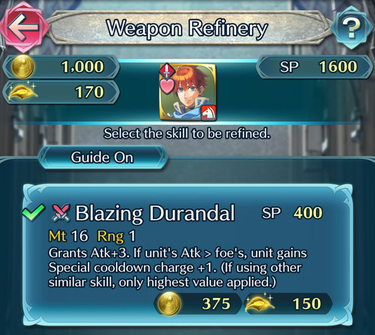 . You can earn these from various game modes and certain quests. The same SP used when learning skills is also required, so be sure to train up your allies!

. You can earn this by upgrading weapons in the Weapon Refinery, so be sure to upgrade when you can.

What Kinds of Upgrades Are There?[edit | edit source]

Weapons have multiple options in the Weapon Refinery, so considering the characteristics of each Hero when deciding which to go with is key. If you upgrade the weapon in multiple ways, you can switch between the different upgraded versions via the Equip Skills menu, allowing you to choose the best weapon for the job.

Some weapons can evolve into more powerful forms.
Example:

Any Hero holding a refined weapon receives a special visual effect on the battlefield. If you spot an enemy with this effect, be careful of their upgraded weapons!